Are you wondering what new requirements the Obama Administration has created for firearms in trusts regulated under the National Firearms Act ("NFA"), such as silencers, short barrel rifles, and machine guns?

Before bracing yourself for red tape, bear in mind that the new regulations will not come into effect until 180 days after they have been published in the Federal Register--and they haven't been published yet.  Also, it's important to know these new requirements are not retroactive.  So NFA firearms registered before the announcement of these new requirments will not be affected by these requirements, and NFA firearms registered by applications submitted before that 180 day deadline will not be subject to the new requirements.

What are the new requirements?

Based on the Final Order known as '41F' (originally proposed as '41P'), new applications for NFA firearms submitted to ATF after the new rules come into effect must include ATF Form 5320.23 for each so-called 'responsible person'.  In an Arsenal Gun Trust, some but not necessarily all the people in a client's trust would be considered responsible persons.

ATF has released the draft version of ATF Form 5320.23 entitled "Responsible Person Questionnaire."  It provides ATF information to be used in a background check to ensure the responsible person is not in fact a 'prohibited person' who may not possess NFA firearms.

This new form does not require the signature of a Chief Law Enforcement Officer (CLEO).

What benefits will a trust offer under these new rules?

A trust enables you to authorize 'responsible persons' to have legal possession of your NFA firearms.  Therefore you reduce the risk of committing a felony, because even just possible access to your NFA firearm outside your presence would be considered an illegal transfer.  Such a violation of the NFA could lead to severe penalties, including up to $250,000 in fines, up to 10 years imprisonment, confiscation of all your firearms, and loss of your Second Amendment rights.

Additionally your Arsenal Gun Trust would provide an estate plan so your gun collection may be inherited lawfully and safely.

Please note, it is very important to ensure your trust will continue for as long as the state law governing your trust will allow.  ATF will allow your successors to keep your existing trust and the NFA firearms it contains without the need to obtain new NFA tax stamps or comply with the new rules, but this is only possible if your trust may continue beyond your lifetime.  Many trusts do not continue very long, and many states law restrict the duration of a trust.  Arsenal Attorneys™ can review your trust, and we can amend your trust so it incorporates the Arsenal Gun Trust™ design.  Because we are perhaps the only law firm to offer direct attorney-client relationships to clients requiring help with NFA firearms, we are able to help you determine the possibility another state's law if it permits a longer duration for your trust.

We estimate there are hundreds of thousands of people named as 'successor trustees' in all the gun trusts in existence.  In typical gun trusts, successor trustees would not meet the definition of a 'responsible person' because they do not possess the powers of a trustee until they actually succeed the trustee.  That succession would probably happen automatically if a trustee becomes incapacitated or dies.  Therefore, a successor trustee would automatically become a 'responsible person' under 41F, and if they didn't know or weren't aware of the need to submit ATF Form 5320.23, they'd automatically be out of compliance with 41F.  Similar situations could arise for beneficiaries or for people later appointed to a trust containing firearms subject to 41F. It's likely the design of most gun trusts would leave these people unprotected and unaware.  On the other hand, perhaps 41F is not as far-reaching as initially feared.

We're still waiting for the final action on for 41F to be published in the Federal Register, and we will closely analyze whether it differs from the current current version posted on January 4.  Interestingly, the new requirements for 'responsible person' only address applications for an NFA firearm.  It does not explicitly say that a person added to a trust after a NFA tax stamp is issued would be required to submit ATF Form 5320.23 even if they meet the definition of a 'responsible person.'  Could this be an oversight by ATF?  Perhaps not.  Their filing system and the National Firearm Registration and Transfer Record (NFRTR) are organized based on serial numbers of individual firearms--not by owner or trust.  Thus if a trust already owns five NFA firearms, and two new people are added to the trust, then 10 separate ATF Form 5320.23's would need to be filed because each of the two new 'responsible persons' would need to file a single form for each of the five NFA firearms in that trust.  We suspect that volume of red tape would be overwhelming for ATF systems, which would explain why 41F might deliberately apply only to the moment an NFA firearm application is not made.  A valid trust coud contain just a single 'resonsible person' at the time of an NFA application, which would mean only one copy of ATF Form 5320.23 would need to be submitted for that application.  Stay tuned for further analysis on this issue.

What should you do?

In consideration of the above, Arsenal Atttorneys™ is offering new and existing clients the following advice:

Contact Arsenal Attorneys™ today to create or update your trust.  We are possibly the only law firm to serve so many clients nationwide in firearms law through direct attorney-client relationships without a middleman.  This enables us to support clients who move to a new state, and we can advise clients about the possibility of using another state's law if advantageous.  Want to receive news and information like this in the future?  Sign up for our newsletter using the form at the bottom of our homepage. Learn more about us by visiting our News & Events page.  To request our Arsenal Gun Trust™ services, visit this page.

Below is an early draft version of ATF Form 5320.23.  Interestingly it still contains the CLEO certification, which was eliminated in the Final Order for 41F announced this week.  We will post the final version of this form when it is published by ATF.  While the CLEO signature will not be a requirement, photographs and fingerprints will be required.  Also, providing a social security number will be optional. 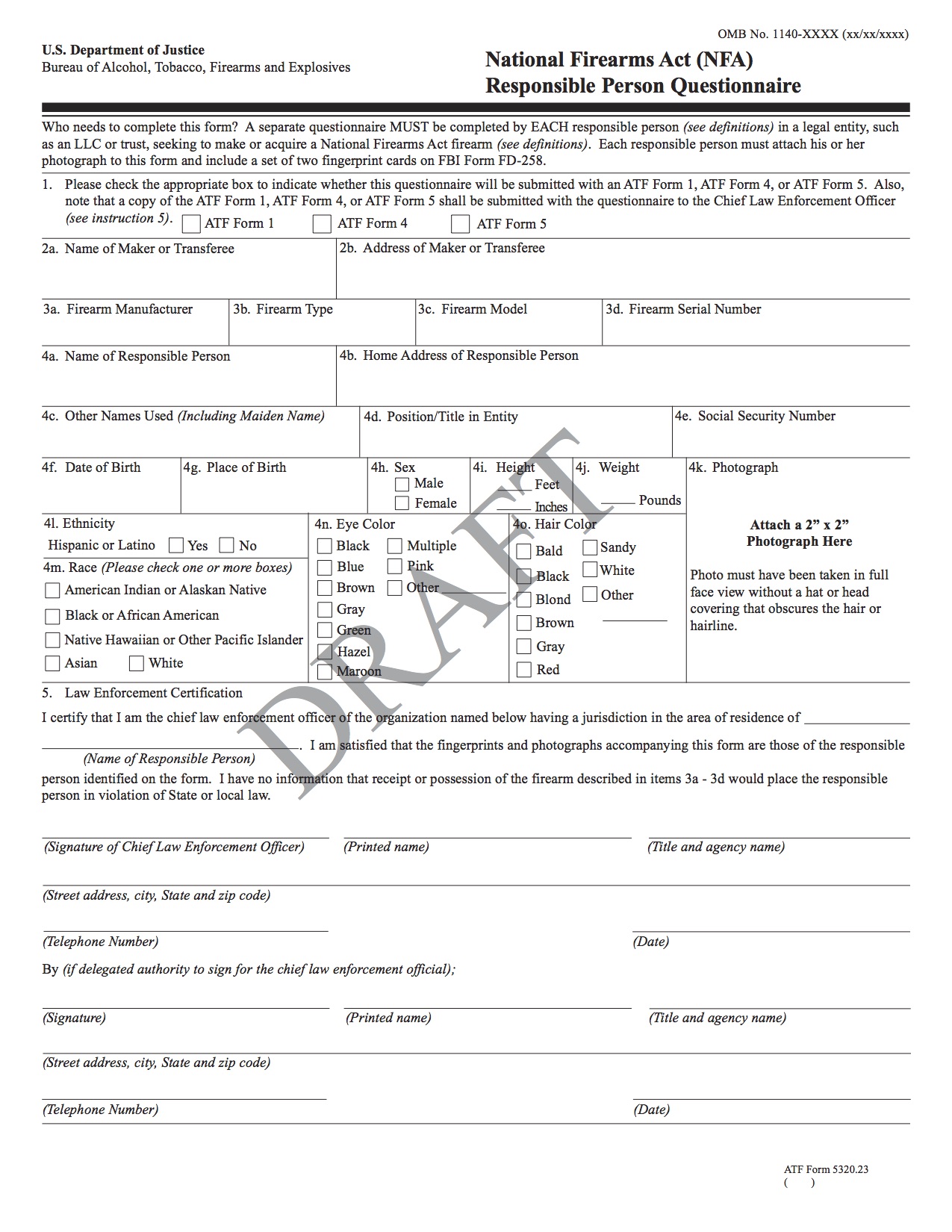 More in this category: « Now's the Time to Apply for NFA firearms with a Trust The Arsenal Gun Trust™ is Now Upgraded and Cheaper »
back to top