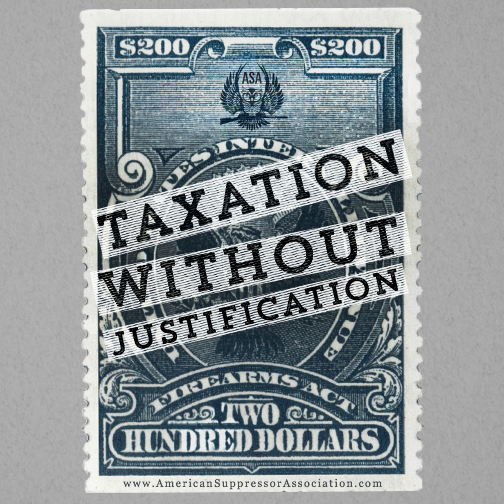 The most common question we receive lately concerns the Hearing Protection Act ('HPA').  In the House of Representatives it is H.R. 367. The Senate version is S. 59.  This legislation was recently re-introduced in Congress following President Trump's election and the Republican takeover of both the House of Representatives and the Senate.  The HPA would de-regulate silencers by removing them from the National Firearms Act (NFA).  If enacted, suppressors could be purchased without NFA taxes or registration.  Here are the possible outcomes for this legislation.

1.  Success:  The House and Senate pass the HPA in the current session, and the President signs it into law.

2.  Compromise:  Any kind of compromise version could be possible.  An alternative solution could be a streamlined process allowing you to register a suppressor and pay the tax at the point of sale in a gun shop.  Thus you could take home your can immediately, but transfers, possession and inheritance would still be regulated generally the same as before.  Of course, the refund could be omitted.

3.  Failure: The HPA could die a quiet death in committee (no pun intended) or fail in a vote on the House floor, or in the more daunting Senate.  The Senate's 'cloture rule' requires 60 votes to end debate, then a simple majority would be needed for final passage.  There are currently 52 Republican Senators, and not all of them could be assumed to be reliable votes for the HPA.

What's our prediction?  We just don't know, but here are some thoughts. At last count, the HPA had at least 74 co-sponsors in the House, but Congressional GOP leaders like Paul Ryan have been silent on the issue (again, no pun intended).  Of course Republican control of the House, Senate, and Presidency give the HPA improved chances; however, HPA will only pass if these politicians are prepared to expend political capital because a price would need to be paid for its passage.

"The HPA would be an astonishing victory"

After fighting over Obamacare, immigration, the border wall, a Supreme Court appointment, ISIS, NATO, trade deals, tax cuts, national concealed carry reciprocity, abortion, etc., will Congress and the President have enough motivation to fight for HPA?  Perhaps the greatest challenge to the HPA is the fact it is a dream come true for gun control advocates who will use demagoguery to demonize the HPA's supporters.  On the other hand, the NRA and the American Suppressor Association have advocated for silencer reform more aggressively than ever--with Arsenal Attorneys' support--and both of them accumulated much political capital of their own during the presidential campaign.  The NRA reportedly spent $36 million to support various candidates in the 2016 election cycle.

Currently H.R. 367 has been assigned to both the Ways and Means and the Judiciary Committees. The website www.govtrack.us gives the HPA a 5% chance for enactment, but without much explanation.

Enactment of the HPA would be an astonishing victory considering it would be the first success in rolling back the National Firearms Act since its adoption in 1934.  Throughout its history, the NFA has seen little change.  For example, the $200 tax on silencer transfers has remained the same since 1934.

". . . deregulation would improve hearing safety, reduce noise pollution, and stimulate interest in the shooting sports--without any factual basis to expect a negative impact, such as increased poaching or gun violence."

What should you do?  First, contact your Member of Congress and Senator to express your opinion on HPA.  Explain how deregulation would improve hearing safety, reduce noise pollution, and stimulate interest in the shooting sports--without any factual basis to expect a negative impact, such as increased poaching or gun violence.  Second, determine the priority of your next suppressor purchase versus your expectation for HPA's passage.  The HPA could languish for the next two years during the current session of Congress. If it fails to pass in this session, the HPA's prospect for success could be greatly diminished, unless the 2018 elections give the GOP a super majority in the Senate. If you don't like waiting, you should consider obtaining a silencer now regardless of HPA.  We say this because you might be rewarded with a faster tax stamp and a bargain. This could be possible because of three reasons. First, ATF will soon finish the backlog of NFA applications submitted in the first half of last year. Second, suppressor sales have declined as people wait and see if HPA passes, thus ATF is receiving fewer NFA applications. Third, ATF announced last fall it will elevate the NFA Branch to a full-fledged Department with greater resources and staff to complete its work. Therefore we could soon see the fastest NFA approvals by ATF and discounts by the firearms industry to spark demand.

One thing is clear, for the foreseeable future, a trust remains the recommended solution for registering NFA firearms to facilitate possession and inheritance by others.  We can revise virtually any trust to use our new Arsenal Gun Trust design, which minimizes the effects of Obama era executive action.  Contact us to discuss how a 'restatement' of your trust can help you and your loved ones.